book stephanie for a backyard serenade:

"After an entire year of live-streams, I'm filling my summer with (a)live-and-in-person 'Backyard Serenades' throughout the Pacific NW! If you or someone you know is having a party, a reunion, a celebration brunch, a company picnic - you name it, I will bring my guitar and play an acoustic set of music for you and your friends/family. Also... I'm offering a digital copy of my new, unreleased CD CROSSFIRE to all of the attendees! (Bonus: this means you and your friends will get it before anyone else!)"

Since the onset of the pandemic, Stephanie and her husband Tony Furtado have been streaming live concerts from their living room in a series they call "Thursday Nights Live" featuring folk/Americana/pop/soul inspired original songs. Both veteran musicians, each with their own solo career and over 30 albums between them, they've created a concert series that engages their community of musicians and reconnects them with their fan-base from all over the world.

"Originally we started this series as a way to compensate lost income from all of our gigs/tours that have been cancelled. All of the musicians we know are in the same boat... it's turned into a really interesting and creative way to stay connected to our friends and to invite fans into the party. We never imagined having a trumpet, lap steel or accordion playing in our window but it's been a beautiful thing."

Tune in every other Thursday at 7pm here >> 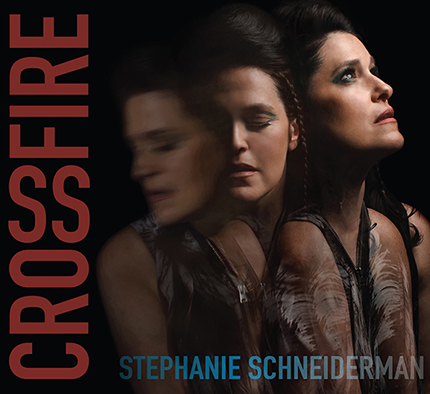 On Crossfire, Stephanie Schneiderman takes matters into her own hands as an artist and (for the first time on her own studio album) as a producer. She combines her past sonic explorations—folk, Americana, trip hop, and pop—into a beautifully dark and deeply introspective recording that is as fresh as it is compelling. Crossfire is a self-released labor of love that celebrates her community and newfound artistic freedom as producer, and will be enjoyed by anyone looking to sit down with a timeless and truly great record.

Crossfire will be delivered exclusively to album patrons in April of 2021, and will be released everywhere music is sold, streamed, or downloaded later in 2021.